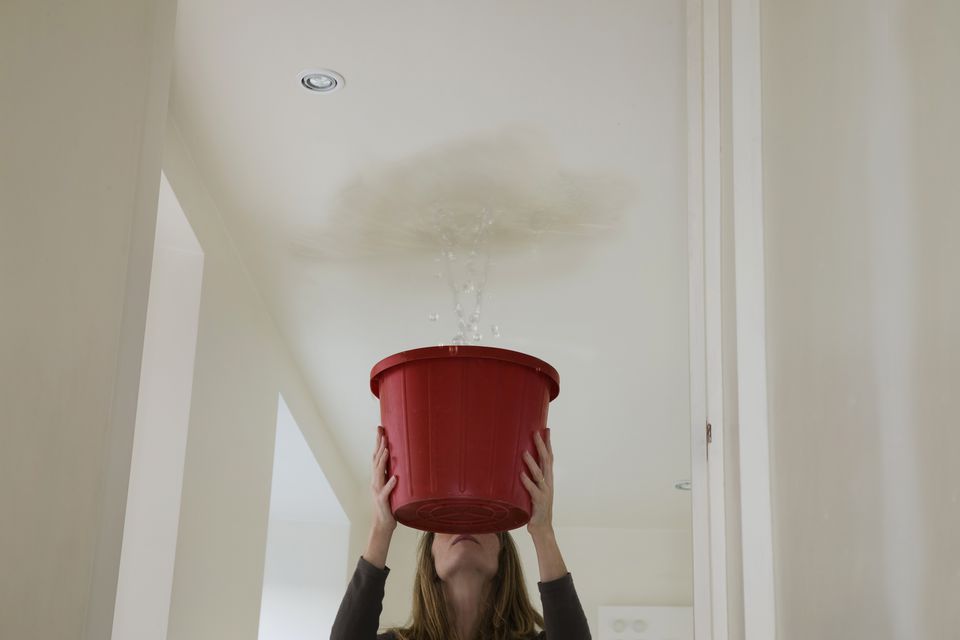 We need to fix that leak 💧

My husband and I belong to a sports center in our local community, and I love it.

A signature part of the sports center is its “vintage” gym constructed in the 1970s. The gym houses a full-size basketball court and an indoor track, which is positioned along the periphery but above the court.

With 6 goals (2 at either end of the full rectangular court and 4 in half-court positions along the sided) the gym is very well used by people playing basketball every night of the week. I do not play basketball, but I use the gym for walking on the track (16 laps = 1 mile). As I walk, I look down onto the court and watch people make or miss baskets. I hear the squeaking of sneakers and the irregular bouncing of all the different basketballs. As I walk around, I study the track—being attentive to its texture, color, and pattern. One intermittent feature of the track is its gauntlet of five-gallon buckets. After a rain, buckets of varying colors are positioned to catch drips that would otherwise be falling from the ceiling onto the track’s surface. I’ve been a member of this sports center for five years, and for five years I’ve pondered this question: “Why don’t they fix the roof?”

This past summer, the floor of the basketball gym was completely refurbished and the indoor track’s surface was replaced. It was wonderful to see that the sports center used some of the income for upkeep and maintenance! A month after the gym reopened, there was a torrential rainstorm on a day that I went to the gym. Much to my dismay, the buckets were one the track catching drips from the ceiling. “Oh, good grief! If they’ve made the effort to replace the surface of the track, why didn’t they make the effort fix the roof, too?”

From time to time during the past ~40 years of our life together, my husband Jim worked as a general contractor. Jim often uses contractor analogies when he’s talking with me. This was not an analogy; this was an absolute: “Let me give you a lesson in building construction.”

This is what I learned: roofs can have leaks in any number of places. The drip that’s coming down onto the track could be coming from water that’s accumulated in the roof at one spot but gained access to the roof from a totally different location.

It can be very time consuming; it can be very expensive to find a leak. Sometimes it’s less expensive to replace a roof, especially if it’s an older one. Literally, finding the crack that’s letting in water is akin to finding a needle in a haystack.

As much as I wanted to blame the owners of this sports center for not taking better care of it, I was assuming an easy fix. I felt the need to go to apologize to the owners because maybe they weren’t so thoughtless and careless after all. They did spend a lot of money on the track. They invested in making something work so that the facility would be appealing the clientele. However, after a rain, the buckets still form an obstacle course on the track.

What is the better choice for a business?

Imagine that you owned the sports center. What would be the ramifications of closing for a month to redo the roof and to stop the drips? How much money would be lost from those who either pull or suspend their memberships? What are the short-term and long-term suspend gains and losses? Is the expense of getting the roof repaired any more or less expensive than the constant “bandage on a broken arm” solution? Is the sports center coming out ahead financially?

I challenge you as a business owner to be attentive to those things, like the drip, that are causing you to have to put out the metaphorical five-gallon bucket to catch drips. How many times do you manage a problem instead of really dealing with the cause of the problem and fixing it?

I know that working with teams of people can be challenging. Sometimes, especially when one person in the mix is not doing their part or not working well with the team, you have a tendency to put a bandage on the broken arm–to provide cover, to make excuses, to give them other chances.

The drip can potentially damage, if not destroy, the building.

Even though it feels scary to suspend all activity until you get critical problems fixed, sometimes that’s what you need to do.

The root problems could be tied to your business’s value ladder and the products and services that you offer. It could be about how you define your ideal client avatar and the whole kit and caboodle that’s tied to funnel-based marketing. This can be terrifying because you’ve already gotten so much in place. You want to continue to make money. The idea of stopping to revamp and maybe even rebrand and redo is scary because it means you’re potentially losing customers, losing money.

When is it better to call a timeout, revamp and start over?

Transition is complicated, but transition can be done, and it doesn’t mean shutting down everything for a year. However, when it’s time to jettison the parts that are no longer working, you need to do it or it will hurt your business. You need to do whatever it takes to give your business the equivalent of fixing the roof. Quit trying to position buckets to catch the drips. Don’t keep everything up and running just for the sake of being “open.” This can get unwieldy and out of hand.

How do you acknowledge and repair the things that are broken? Sometimes, it really is worth making the effort to find and to fix problems at that deeper level. Be brave when you need to be.

Please provide comments. Please reach out to us. And if you happen to be interested in our ABEM campaign audit, contact me at ABEM Digital Creations and let’s start a conversation.

We need to fix that leak 💧

My husband and I belong to a sports center in our local community, and I love it. A signature part…
Read More
January 13, 2020 in Blog

What happens when we make assumptions in business? 😇

Every day, part of being human is making assumptions. We make assumptions that the sun will come up and the…
Read More
January 7, 2020 in Blog

Franklin Roosevelt stated something so incredibly important that caught the attention of our nation when he said, "The only thing…
Read More

To transform each client’s business by connecting the dots among their internet-based marketing tools to create an effective, profit-generating web presence using our results-oriented services supported by ABEM’s Four Pillars.